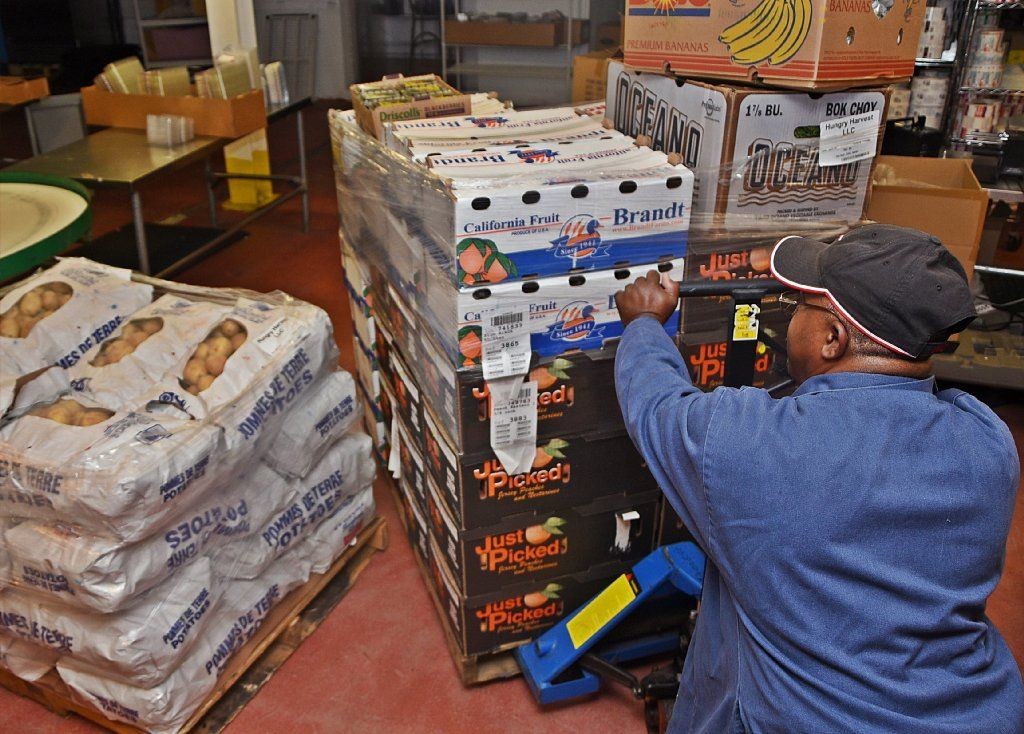 A worker moves boxes of peaches for Hungry Harvest, a start-up based in Baltimore that buys excess food from farms and restaurants and sells it to customers. (Alan White/Baltimore Sun Media Group )
PREVIOUS IMAGE

Our food system is in crisis. In Maryland alone, one in every nine people is food insecure. In Baltimore, approximately a quarter of the population lives in food deserts, meaning they do not have easy access to healthy fruits and vegetables in grocery stores. When you expand this globally, billions of people are either hungry or eating too much of the least nutritious kinds of food.

Yet, food waste is rampant. In the U.S., we waste between 30% to 40% of our entire food supply. That is equivalent to tossing out 133 billion pounds of food and pouring $161 billion down the drain annually. Additionally, it’s an estimated 141 trillion calories lost per year, or 1,249 calories per person per day. To put this into perspective for Raven’s fans, the United States wastes enough food to fill up M&T Bank Stadium — every day.

Not only is food waste a moral and economic travesty, it is one of the largest threats to the environment today. In fact, if global food waste were a country, it would be the third largest producer of greenhouse gas emissions, only behind the U.S. and China. According to the United Nations’ Food and Agriculture Organization, food waste accounts for approximately 8% of all human-made greenhouse gas emissions. It is also resource intensive in America, using 9% of the total landmass of the U.S. (approximately the size of New Mexico) to grow food that nobody eats.

The time for watching and waiting for further evidence is over. We need to reframe the way we think about our food and start thinking about our “foodprints” — the environmental impacts associated with the growing, producing, transporting and storing of all food that we consume.

This planet is precious, and I’m proud to support it in multiple capacities as the CEO of Hungry Harvest, a Baltimore-based produce delivery company working to fight food waste and hunger, and as an ambassador for Earth Day Network’s Foodprints for the Future. The foodprints campaign draws awareness to the impact of the food we eat, focusing on the two biggest sectors that pose challenges to our environment: animal agriculture and food waste.

While the problems we face are systemic, they are also surmountable. As individuals, we can make a difference by observing our food choices and incorporating simple sustainable practices into our lives. Here are a few tips from someone who lives and breathes food waste:

Store your produce in the right place. Not everything goes in that fridge drawer. Different produce likes different types of environments. Just putting your fruits and vegetables in the proper conditions will immediately help reduce the amount of food waste in your kitchen.

Make better use of your freezer. You can freeze fresh produce, fruits or leftovers that are on their last legs or you just don’t have time to prepare or eat right now. The EPA estimates that about 94% of the food we throw away ends up in landfills or combustion facilities. But it’s not just scraps and rotten produce that we tend to toss; uneaten leftovers make up a big portion of our waste. The NRDC reported that prepared foods or leftovers make up about 23% of the food that lands in trash cans.

Consume food that is languishing in the fridge. Make soups, stocks, jams and preserves. It’s easier than you think. Think of all the nutrients and creative opportunities that are missed by throwing away some of the best parts of a fruit or vegetable.

We must do everything in our power to fix the food system. We can’t all drive electric cars or participate in ocean cleanups every weekend. But we change the way we eat. The small decisions we make around meals will collectively make progress toward solving an enormous crisis. Eliminate waste, eat more plants, buy conscientiously and spread the word to your community.