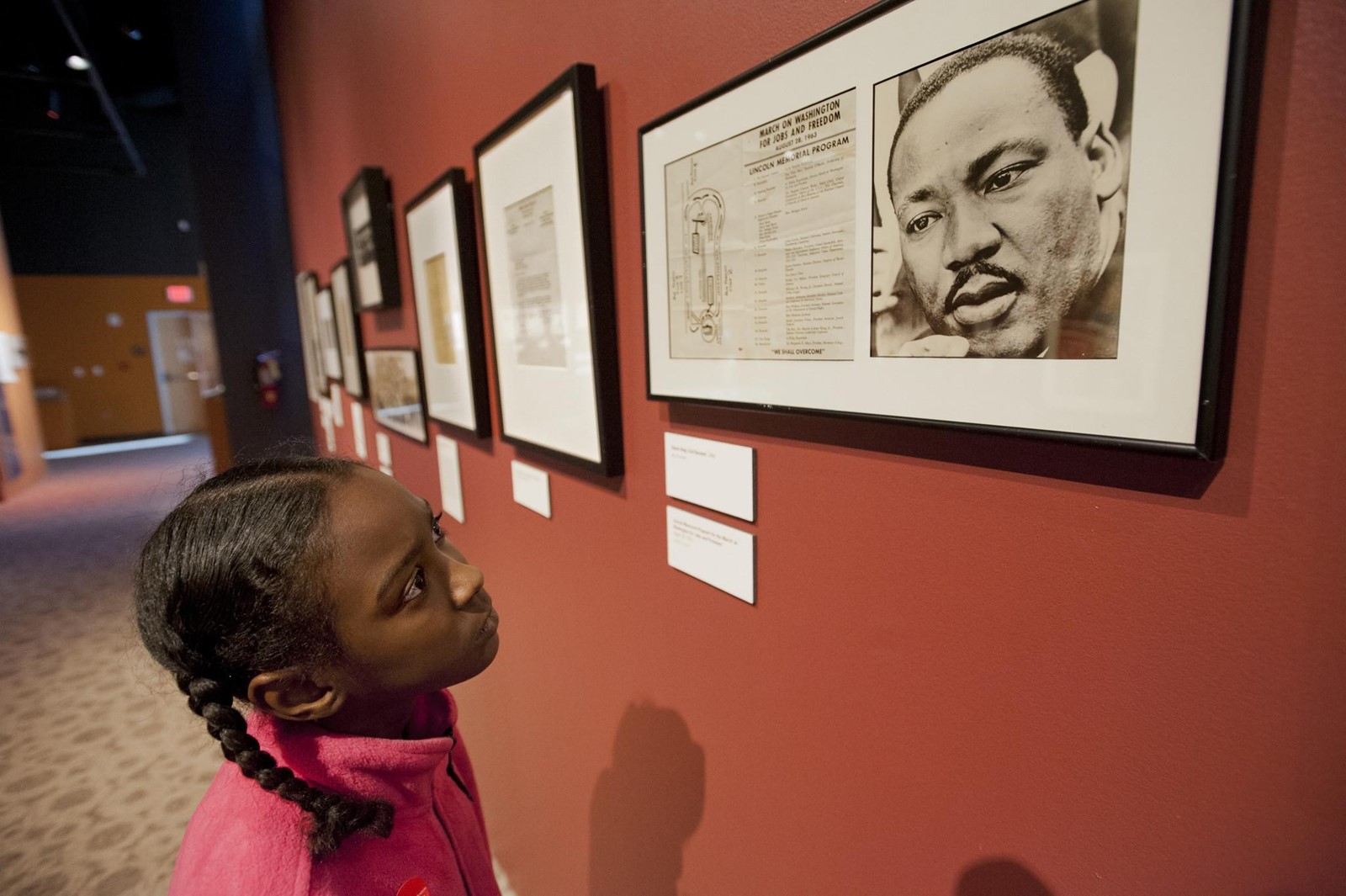 Tinerria Gray, of Baltimore, looks at a photograph of Martin Luther King framed with a copy of the Lincoln Memorial Program for the March on Washington for Jobs and Freedom, dated August 28, 1963, while visiting the Reginald F. Lewis Museum of Maryland African American History & Culture. (Amy Davis/Baltimore Sun )
PREVIOUS IMAGE

An 1808 Certificate of Freedom for “Negro Betsey,” a slave who lived in Frederick, Maryland.

Harriet Tubman’s bible and the shawl given to her by Queen Victoria.

These artifacts could be found in any historical museum in the United States. But these authentic objects are part of the collections of African American museums in Baltimore and Washington, D.C. They are a source of pride, and a reflection of the resilience, ingenuity and courage that is the African American experience in this country.

As we enter Black History Month, it’s a good time to celebrate the role these museums play in preserving a past that isn’t always discussed in the history books. African American history, a vital part of American history, should be experienced during the entire year and not relegated to just one month.

Like most of the more than 35,000 museums in the U.S., African American museums preserve, collect, document and interpret our culture. However, these 200 museums (less than 1% of all museums in this country) also do more than that — they present a narrative of an African American past that has been forgotten, overlooked, neglected, misinterpreted, whitewashed or erased from the history books. We tell our true histories — both harsh and celebratory — from our own perspectives, expanded by the research and discoveries of scholars and curators, many of them people of color.

Fans of the HBO series “Watchmen,” based on the ’80s D.C. Comics Series, watched the opening segment which featured a re-enactment of the 1921 Tulsa Race Massacre, when white rioters killed black residents of Greenwood, an affluent African American community known as “The Black Wall Street.” Greenwood was destroyed, and although the event is preserved in Tulsa, Oklahoma’s Greenwood Cultural Center, many viewers, both black and white, were surprised to learn of an event that rarely, if ever, appeared in history books.

African American museums (or any museum, for that matter) are safe places to explore and discuss our “shared” histories — the strife, hardships and suffering endured over the centuries. At our Dr. Martin Luther King Jr. Day celebration, the Reginald Lewis museum offered visitors a virtual reality tour of the 1968 Memphis Sanitation Workers Strike, which took place the day before Dr. King’s assassination. The experience was so real for one visitor, a white woman, that she looked down at her hands and whispered, “I’m black.” At that moment we watched her experience our shared past.

As we uncover more artifacts and dig deeper into the complicated history of our country, African American museums continue to be chroniclers of the racial injustice, violence and poverty our ancestors experienced. Young visitors to the Reginald F. Lewis museum’s 2018 exhibition, Hateful Things which featured racist Jim Crow memorabilia, said they had never seen stereotypical and derogatory images of African Americans. Older visitors had seen them first-hand, decades earlier. Many African American elders hold their stories silently, deep within their soul, and may never repeat them. But the stories of our elders, the gatekeepers of our knowledge and culture — the griots of our community — must be told and preserved.

The opening of the was a seminal moment in our nation’s history. Decades in the making, it is testimony to the role of African Americans in the creation of this country — a beacon and monument to history and memory.

Rather than diverting attention from smaller museums, its national presence has strengthened the role of African American museums throughout this country. It offers a celebration of the achievement of our culture, a vision for the future and an education for our children.

In the last sentence of founding director Lonnie Bunch’s book, “A Fool’s Errand,” Mr. Bunch writes, “Ultimately, what the National Museum of African American History and Culture has done is to use history and culture, to paraphrase Napoleon, to define reality and give hope.”

No one could have said it better.