The robotic revolution has arrived 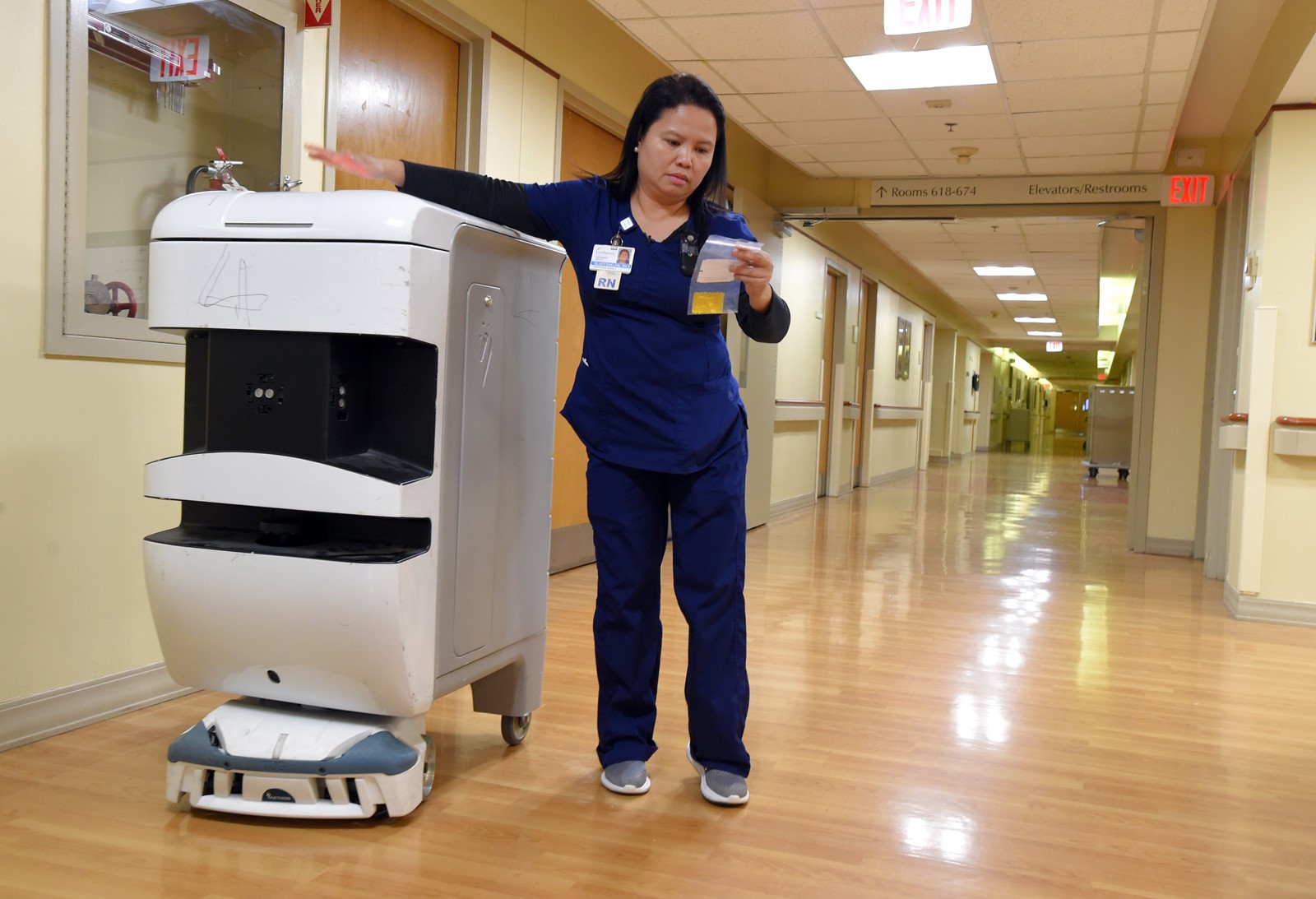 The Swingobot 2000 was showing off, navigating a busy hallway at Sinai Hospital to scrub the floor. Then Tug, a smaller robot, glided up unexpectedly from behind, returning to the pharmacy after delivering medication to nurses.

Tug was programmed to detect people and other obstacles in its path. It stopped, maneuvered around Swingobot, then continued on its way.

For the Baltimore hospital, and for the robots, too, it was just another day at work.

Before Tug, “we had pharmacy technicians and couriers who would deliver to the floor,” said Lisa Polinsky, assistant vice president for pharmacy services for Lifebridge Health. “It took the technicians away from what they were doing in the pharmacy.”

Robots have long worked on the factory floor, typically bolted to an assembly line, where they can perform repetitive tasks with consistency and precision. Now a newer generation, capable of moving about among people, is finding a wider range of work, in stores, hotels, hospitals, offices and warehouses. Robots check inventory, make room service runs, clean floors, deliver medications, linens and food, and even assist in spinal surgery, never tiring of jobs most people find dirty, tedious or dangerous.

For some, that’s cause for concern. The McKinsey Global Institute reports that this increasing automation, if adopted rapidly, could displace up to 800 million workers — 30 percent of the global workforce — by 2030.

But the institute also emphasized that more occupations would change than be lost, because automation would spur demand for millions of additional jobs.

Forrester Research estimates that robots and artificial intelligence could eliminate nearly 25 million jobs in the United States over the next decade, but it should create nearly 15 million jobs.

“Often the fears are overblown,” said J.P. Gownder, a vice president and principal analyst for Forrester. “In many cases it doesn't impact the total number of jobs but changes the composition.

“For every robot, you need a robot repair person.”

But unions say business is losing sight of the value that people bring to work, and the importance customers place on human interaction.

Erikka Knuti, a spokeswoman for the United Food and Commercial Workers, speaks of the growth of self-checkout lines at supermarkets.

“Self-checkout isn’t necessarily better for the customer,” she said. “It’s not faster. You have to do the work that the company used to pay someone to do for you. ... You’re now doing a job you’re not good at, saving the company money — and you don’t get a discount.

Knuti says the UFCW is working with companies to ensure there will be training to meet the demands of a shifting workplace.

Knuti and other advocates argue that automation can and should go only so far.

“People want a real human cleaning their offices and protecting their buildings,” he said. “Automated technology is not the same as having a live person to communicate with and to make sure that your building is safe.

“The commercial real estate market, which is growing and profitable, can afford to help keep men and women working so they can best support our communities and economy.”

“We see a future where increasing use of automation … is actually leading to job growth, not job loss,” said Jeff Burnstein, president of the Association for Advancing Automation.

Lifebridge Health, which operates Sinai and other area hospitals, says it turned to robots to help its staff work more efficiently. Workers can get medicine to patients twice as fast with the help of five Tug robots at Sinai and one at Northwest Hospital.

The robots, supplied by Pittsburgh-based Aethon and nicknamed Jake, Elwood, Rigby and Herbie (one is not named), spend their days delivering medicine from the pharmacy to the nurses. They carry the drugs in secure compartments; nurses must punch codes to gain access. Pharmacy staff can track the deliveries as they would FedEx packages.

The hospital is now considering adding the floor-cleaning robot, the Swingobot, supplied by Baltimore-based Acme Paper and Supply Co.

The Swingobot 2000 can be programmed to remember specific areas to clean and use a precise amount of cleaning chemicals. When it encounters a person or object, it stops, backs up and reconfigures its route. If it has problems, it sends an alert via email or text.

“It’s a futuristic concept, but a reality because it’s now available.”

Robotics sales in the United States are growing at about 15 percent a year, according to the automation association.

Also increasing is the use of “co-bots,” machines that work alongside and offer assistance to people. Advances such as improvements in sensors, laser scanners and software have made the robots safer and less expensive.

“It has been harder for engineers and computer scientists to master the physical world than the digital world,” Gownder said. “It’s easier to set up recommendations on Amazon to buy things than to get a robot to move around the room. But we’re starting, with newer technologies, to conquer those barriers.”

Tug’s supplier, Pittsburgh-based Aethon, now has some 600 mobile robots deployed around the globe, and expects to double that number over the next couple of years, CEO Aldo Zini said. Aethon’s robots work in about 150 hospitals, including Sinai, Northwest and a couple dozen others in the Baltimore-Washington region. They make about 50,000 deliveries each week.

Manufacturing remains Aethon’s fastest-growing market. Companies such as Bosch and Continental use Tugs to deliver materials to assembly lines. They often replace older, less flexible automated guided vehicles that run on tracks, which themselves eliminated the need for people to push materials by hand.

Tugs also are finding their way into hotels, such as the Sheraton St. Gabriel in Los Angeles, where eight robots bring guests linens, luggage and food.

“To make a safe and reliable autonomous mobile robot was quite an engineering challenge not too many years ago,” Zini said. “The technologies are now more mainstream. It works. … There are jobs people don't like to do, like pushing heavy carts, which can cause back problems. For a robot, pushing a 600-pound cart is not a problem.”

In hotels, room service bots are enough of a novelty that guests share pictures of them on social media, says Lauren Schechtman, a marketing and sales vice president with the San Jose, Calif.-based robot maker Savioke.

More than 50 Savioke Relay delivery robots work at Aloft and other hotels in New York, Chicago, Boston, Tokyo, California, Texas and Florida, delivering takeout food and extra towels to guests. In Singapore, a Relay robot delivers food and documents in an office building. And in Beverly Hills, a robot delivers online purchases or food to residents of a high-end high-rise.

Schechtman says Relay can free up the front-desk staff at hotels, and guests get items faster.

“You don’t have to tip the robot,” she said, and “a lot of people feel ... a sense of security in having a robot come to the door instead of a strange person.

“We want to be everywhere indoors where people are actually wasting time moving things around when they can spend more time doing more valuable work.”

Brad Bogolea and two friends were seeking to solve a similar time-wasting problem for retailers when they co-founded Simbe Robotics in San Francisco in 2014.

Retailers lose more than $1 trillion a year, Bogolea said, “because they don’t really know what’s going on at the shelf.”

Enter Tally, a sleek, 38-inch-tall robot with a sensor mast on its back that rolls down store aisles checking inventory. Using computer vision, machine learning and analytical software, it determines whether products are in stock, priced correctly and on the right shelf.

About 20 Tally robots now manage inventory at a half-dozen mass merchants and supermarkets in the United States and Europe, Bogolea says. Tally understands the difference between open space and occupied space and keeps a distance from shoppers. If an aisle is blocked, it will not go down that aisle. If someone steps in front of it, it moves out of the way.

In the future, some robots could interact with customers.

Lowe’s home improvement stores, for one, is looking at how robots can help shoppers.

The retail giant has tested its “LoweBots” in its Orchard Supply Hardware stores in California. The machines guide customers to products, and display answers to questions on screens. The company found that for home improvement projects, shoppers really wanted to talk to a person, not a robot.

Lowe’s reconfigured its “LoweBot” last year and rolled it out for another test in larger stores, starting with five in the San Francisco Bay area. LoweBot is still available to help customers, but spends more time scanning shelf inventory.

The company is assessing results before determining whether to launch a wider rollout or incorporate technology in a different way.

“What we have seen, based on the LoweBot pilot, is when we are able to free up employees from mundane scanning — and these are tasks that can take hours — we were able to put them back on the floor and help them help customers,” said Josh Shabtai, director of lab productions and operations at Lowe’s Innovation Lab.

At Amazon’s 1 million-square-foot Broening Highway warehouse in Baltimore, robots that each weigh about the same as an NFL offensive lineman travel five feet per second carrying up to 750 pounds worth of goods on yellow shelves.

In a warehouse with tens of millions of items, the robots make deliveries to work stations, where employees pick products off the shelves to pack. The process saves workers from having to walk down aisles to find products. The 20 percent of Amazon facilities with robotics can store more inventory, and thus end up hiring more employees, spokeswoman Lauren Lynch says.

Analysts agree that automation and artificial intelligence will transform most jobs in coming years.

That’s been true in operating rooms at Johns Hopkins Hospital, where a mobile robot has been assisting doctors in spinal neurosurgery since November. The Excelsius, invented by Hopkins neurosurgeon Nick Theodore and made by Globus Medical, uses a custom robotic arm and video screen to help surgeons precisely place screws, needles, drills or other instruments in the spine during procedures.

“It’s mostly about safety and precision,” said Jeff Siewerdsen, director of the Carnegie Center for Surgical Innovation at Johns Hopkins. “This is a game of millimeters, where you are millimeters away from vital structures, spinal cord and major vessels.”

Brandon Carson directs learning technology for Home Depot. He wrote a book last year on the digital transformation of the workplace.

Managers in the future will need to know how to lead a fleet of both people and robots, he says.

“We’re going to be working alongside robots and intelligent machines to get things done faster and move things around quicker,” he said. “But we’re in the early stages of what this can bring us.”

When Sinai started using its pharmacy robots, Polinsky said, “initially it was a little scary for people. … There are movies around robots taking over and having minds of their own.”

Now, she said, “folks are just so used to them. It’s another employee.”