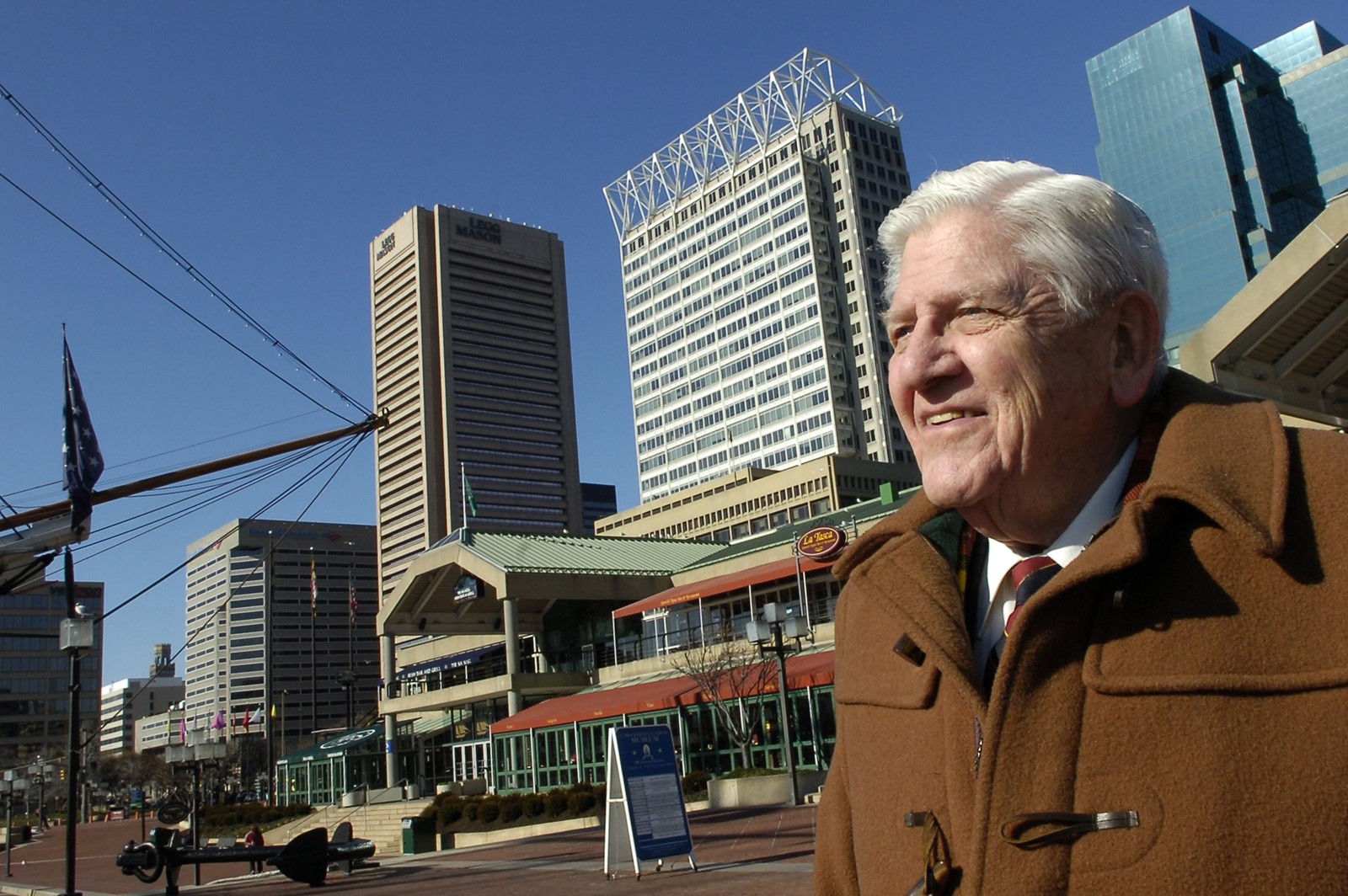 Martin L. Millspaugh Jr., who shaped the redevelopment of downtown Baltimore, from the demolition of the old O’Neill’s department store through the Inner Harbor, died of cancer Tuesday at Roland Park Place. A longtime resident of Ridgewood Road in Roland Park, he was 92.

“More than any one person, Marty was responsible for the Inner Harbor,” said Robert C. Embry Jr., president of the Abell Foundation and former head of Baltimore’s redevelopment program. “He was dedicated and hardworking.”

In 1960 Mr. Millspaugh co-founded a quasi-city agency, known for many years as Charles Center-Inner Harbor Management, with local philanthropist J. Jefferson Miller. Over the next quarter century he managed the Charles Center and Inner Harbor projects, and once estimated that he had overseen $6 billion in new construction spread across 300 acres.

“Marty was reserved — really a quiet Roland Parker. He was thoughtful and worked in great detail, whether it was picking an Inner Harbor sculpture or selecting a major developer,” said M. Jay Brodie, the former president of the Baltimore Redevelopment Corp. “There was nothing that went into the Inner Harbor where he did not play a key role.”

This redevelopment work changed the face of an aging, industrial and maritime downtown and replaced it with the National Aquarium, Maryland Science Center, the Convention Center, Hyatt Regency Hotel, Harborplace and Gallery.

Born in Columbus, Ohio, he was the son of M. Laurence Millspaugh, head of Samuel Kirk & Son, then the country’s oldest silversmith company and founded by Mr. Millspaugh's great-great-grandfather. His mother was Elizabeth Park.

He was a 1943 graduate of the Gilman School and served in the Army’s Air Corps during World War II. A sergeant, he was stationed in Cuba and on Tinian in the Mariana Islands of the Pacific Theater.

In 1949 he received a bachelor’s degree from Princeton University’s Woodrow Wilson School for Public and International Affairs, where he was named to the Phi Beta Kappa honor society.

He became a reporter for the Richmond News Leader and later joined the Baltimore Evening Sun. He covered housing and urban renewal issues and was nominated for a Pulitzer Prize.

In 1952 he married Meredith Plant and they settled in Roland Park, where they raised a family.

In 1957, the American Newspaper Guild honored a series of his articles related to blighted and overcrowded housing conditions. The articles had followed a Eutaw Place apartment house fire in which five people perished. He also had a stint in London and covered Scotland Yard and its canine corps.

He left the paper and took a job in the administration of President Dwight D. Eisenhower, in the Urban Renewal Administration.

In 1960, Baltimore’s Urban Renewal and Housing Commission chose Mr. Millspaugh to become professional director, or deputy general manager, of a public-private team. He was charged with implementing the Charles Center Project, a rebuilding effort that grew out of business leaders’ concerns when the O’Neill department closed.

Mr. Millspaugh and his colleagues produced an estimated 15 major buildings and stimulated more than a dozen others in adjacent blocks.

“It stopped the economic decline of the Baltimore Central Business District and revolutionized the nation's downtown redevelopment agenda,” Mr. Millspaugh wrote in his private papers.

"Martin Millspaugh has watched every brick go into place in Charles Center and the Inner Harbor,” The Baltimore Sun stated in a 1985 editorial, written when he stepped down from his city redevelopment post. “No one person built all this, but he has had more to do with it than anyone else.”

The newspaper called him “a builder who can get things done, but also a planner thinking in decades, an arbiter of taste improving the city's looks and a public thinker, always aware that his real clients are the citizens of Baltimore."

“During that time, Baltimore was suffering from a radical decline — due to the abandonment of the small Inner Harbor due to the global shift to container ships, which coincided with the flight to the suburbs by post-war residents and businesses.” Mr. Millspaugh wrote. “The city was threatened with municipal bankruptcy.”

In 1976 Mr. Millspaugh introduced James W. Rouse to the first stage of a rebuilt Inner Harbor. What soon followed was the Rouse Co.'s development of Harborplace, then described as a festival marketplace.

“It became the catalyst which drew all of the attractions into a critical mass," Mr. Millspaugh said. “[It had] an attendance of more than 20 million in the first year.”

The success of the Inner Harbor earned national awards from the Urban land Institute and the American Institute of Architects.

After stepping down in 1985, Mr. Millspaugh joined the Enterprise Development Co., founded by Mr. Rouse. He built the foundation’s consulting business in the U.S. and abroad. He worked in Barcelona, Belfast, Osaka, Caracas, Rio de Janeiro and Turkey. In the U.S., he worked in Atlanta, Orlando, Long Beach, Philadelphia, Oakland, Hartford and Honolulu, among others.

“His work was innovative and collaborative,” said his daughter, Elizabeth Millspaugh “Lisa” Schroeder of Baltimore. “He believed that Baltimore deserved the absolute best and that Baltimore was worth fighting for.”

Mr. Millspaugh donated his papers to the Sheridan Libraries of the Johns Hopkins University.

He was also a past trustee of the Enoch Pratt Free Library, Baltimore Symphony Orchestra Association, Metropolitan YMCA and Blue Cross/Blue Shield of Maryland.

In addition to his daughter, survivors include two sons, Martin L. Millspaugh III of Bethesda and Thomas E.D. Millspaugh of Baltimore; 11 grandchildren; and a great-granddaughter. A daughter, Meredith M. Durham, died in 2000. His wife of 64 years, who led Downtown Discovery Tours, died in 2016.