Loved ones meet but can’t touch at U.S. border barrier 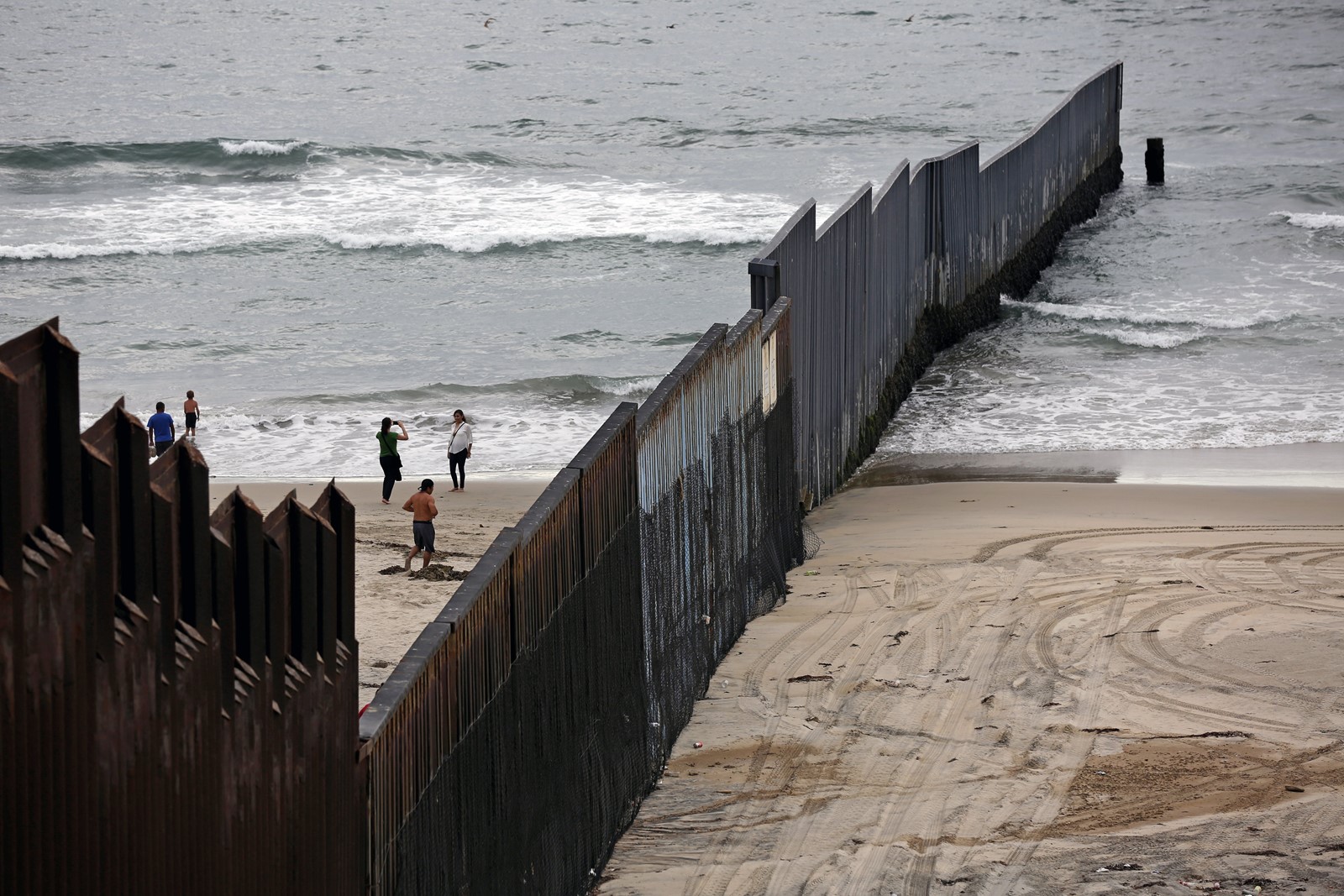 Beach-goers take photos on the Mexican side of the fence, which is patrolled on the northern side by U.S. border agents. (Gary Coronado/Los Angeles Times )
PREVIOUS IMAGE

— Thrusting into the sky from the edge of the Pacific, Tijuana’s lighthouse, or faro, sends out a beacon where the northwestern nook of Latin America edges against the southwestern tip of the United States.

A coastal esplanade south of the fence marking the international boundary is both a beachy hangout and a hub for border artists and activists, yoga aficionados and tourists snapping selfies.

It is also the site of often-emotional encounters during which stranded deportees on the south visit with separated loved ones on the north, albeit through a mesh-steel fence.

A minister of the “church of the lighthouse” says an interfaith prayer on behalf of divided families.

“Family reunification,” reads one graffiti manifesto splashed on the southern face of the fence. “A future to believe in.”

There are neighboring communities the length of the U.S.-Mexico border: Calexico and Mexicali, El Paso and Ciudad Juarez, Brownsville and Matamoros.

But here where the border meets the sea, one side is oddly festive, the other militaristic — the contrasts and frictions of U.S.-Mexico relations summed up on a beach.

Summer days in the neighborhood known as Playas de Tijuana bring a vigorous coastal tableau: wandering musicians, families with towels and umbrellas, kids rollicking in the surf. Vendors hawk ice cream. Cafes serve — beer and shellfish — and the scent of carne asada wafts through the breeze.

From a hilltop across the divide in the United States, where a pair of World War II-era bunkers still dot the landscape, the stolid circle of Tijuana’s beach-side bullring stands in shadowy contrast to stadium-style lights meant to deter illegal entrants.

To the north lies a white-sand stretch of California coast littered with clumps of seaweed and home to vigilant seagulls.

No people are in sight.

Raw sewage from Tijuana frequently seeps into the coastal wetlands on the U.S. side, deterring many from the beach at Border Field State Park, as the zone is called.

The park, much of it the site of a former naval airfield, was dedicated in 1971 by then-first lady Pat Nixon during an excursion to the border.

She confidently stepped across the then-skimpy barbed wire barrier marking the border, the Los Angeles Times reported, and was “engulfed by the Spanish-speaking crowd” as a mariachi band followed.

The first lady vowed to return someday “to try surfing” and declared: “I hate to see a fence anywhere.”

Looking back, Pat Nixon spoke on the cusp of an era in which massive illegal immigration via a porous U.S.-Mexico border would help spur a demographic and political transformation in California and beyond. The solid Republican California that produced Richard Nixon would vanish, as would the near-open border.

In a generation, the country has gone from a first lady who openly abhorred border fences and waded into a crowd of well-wishers in Tijuana to a president who denounces Mexicans as criminals, vows to build a border wall and is a demonized figure in Mexico.

The 1970s vision of a cross-border park for residents on both sides of the divide never came to pass.

These days, a metal barrier undulates down the hills into the surf, like an iron jetty. It’s meant to stop people, not to break waves.

The fence is about 12 feet high. It’s a collection of vertical metal shafts and rods with spaces between them.

Dense wire mesh overlays a section of the metal posts. This is the first, or “primary” fence, in the nomenclature of the U.S. Border Patrol, which guards these precincts.

Just to the north is the taller “secondary” fence.

Between them lies a security corridor, a kind of buffer zone, of about 50 yards in width, that is brightly lit each evening.

Mostly inside this corridor is a place known as Friendship Park, where immigration authorities allow visitors limited access to see and speak with relatives on the Mexican side.

Touching through the fence is forbidden, except on special occasions, despite petitions from a “Let Them Hug” movement seeking to expand physical contact.

“It was so emotional for me, I couldn’t stop crying,” said Mauro Mejia, 63, from the Mexican state of Nayarit.

He was recalling his first meeting in more than two decades with his son, Ricardo Mejia, 44, a resident of Riverside, Calif.

The mustachioed father, his face lined like a well-worn baseball glove, was on the southern flank, the son on the north. The son, like others, could jeopardize his temporary legal status if he entered Mexico.

The relatives conversed through the fence, raising their voices; those on the U.S. side have to keep their distance from the barrier. A Border Patrol agent monitored goings-on at the threshold.

She is one of the multitudes who entered the United States via the border in the old days, and eventually obtained legal status.

“It was so much different then,” she recalled, gathered with her future in-laws along the fence on the Mexican side, not far from a marble obelisk.

The obelisk is the first of 258 boundary monuments that trace their origins to the Treaty of Guadalupe Hidalgo of 1848, which ended the Mexican-American War and saw Mexico lose much of its territory.

These days, some would-be border crossers attempt to swim around the fence, diving into the frothy surf at low tide; others use jet skis or fishing boats turned smuggling craft known as .

Others still endeavor to traverse the double fencing.

The first barrier is easy enough; a small stepladder or a friend provides a boost. Bystanders watch these attempts with curiosity, but generally no one on Mexican soil interferes with a time-honored tradition.

The second fence, about 15 feet high, poses a much greater challenge.

On a recent evening, a Mexican man in shorts, sunglasses and a straw hat was almost atop the second fence when a U.S. Border Patrol agent, Eduardo Olmos, spotted him and ordered him to descend.

The man complied, slowly climbing down and submitting to arrest.