37 homeless who died in ’17 memorialized in Balto. Co. 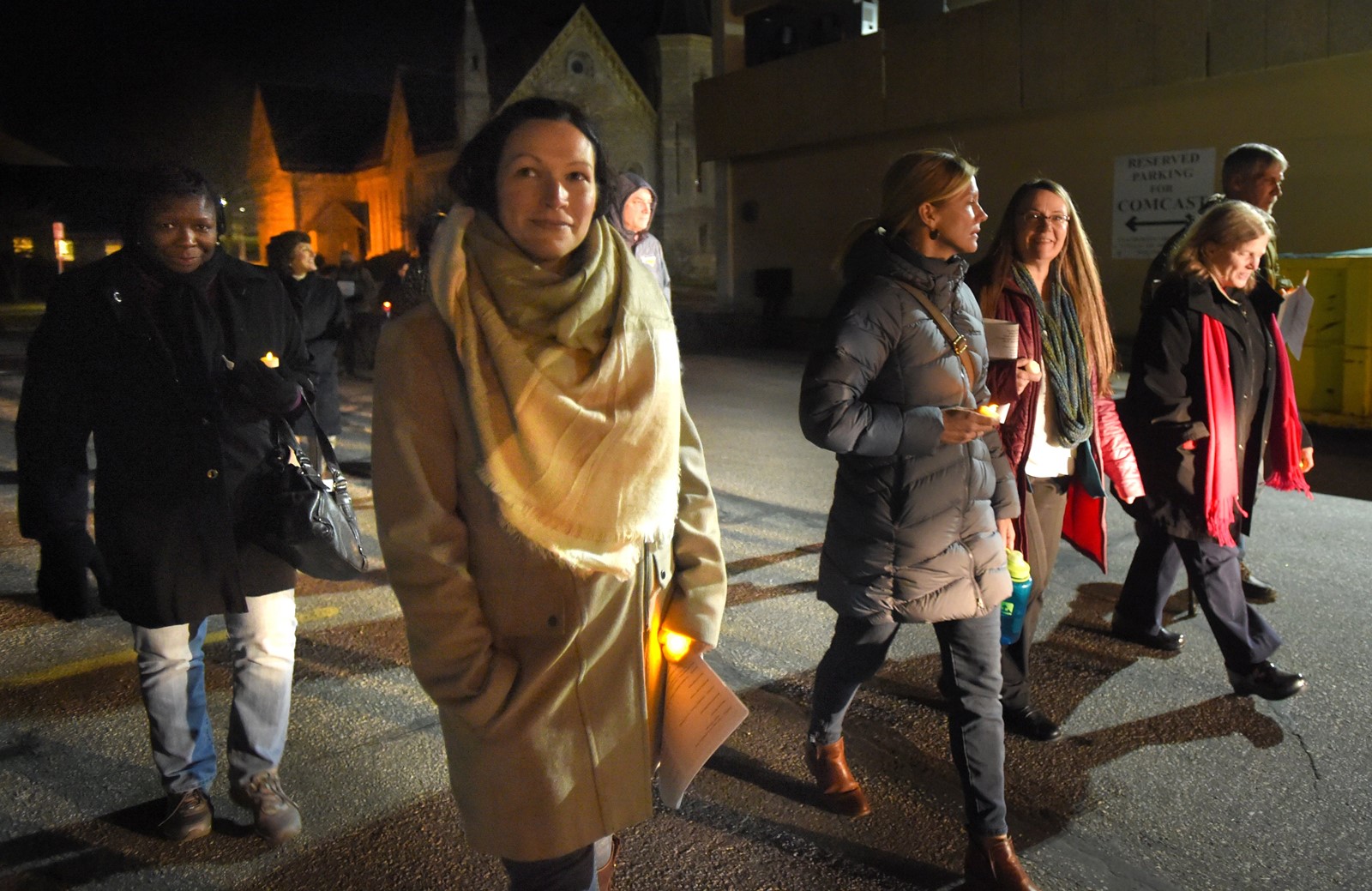 Marybeth Baughman, foreground, was one of dozens of people who attended the annual Homeless Persons' Memorial Service Thursday evening at Trinity Episcopal Church in Towson. The service is one of dozens around the country on the longest night of the year. (Lloyd Fox/Baltimore Sun )
PREVIOUS IMAGE

Dozens of people gathered at Trinity Episcopal Church in Towson Thursday evening to remember the 37 homeless individuals — none older than 69 years — who died in Baltimore County this year.

The annual Homeless Persons’ Memorial Service, organized by Baltimore County Communities for the Homeless, is one of dozens held across the country on Dec. 21, the longest night of the year and the start of winter.

“The main purpose is to remember and honor the lives of those who have passed away,” said Terri Kingeter, an officer with the Baltimore County advocacy group. “It also raises awareness that there are people who are out on the street and dying.”

In Baltimore, advocates gathered Thursday evening in McKeldin Square for music and a memorial service.

Anne Arundel County held its fifth annual vigil at Lawyers’ Mall in Annapolis to remember the 24 homeless individuals who died in the county this year.

Nearly 29,700 people experienced homelessness in the state at some point in 2016, up 6 percent from the previous year, according to a 2016 annual report on homelessness by Maryland’s Interagency Council on Homelessness. About 12 percent were in Baltimore County.

During the Towson event, Kingeter and another advocate read the name and age of each of the 37 dead. The youngest was 19.

“In a lot of cases, this is the only commemoration of their lives,” Kingeter said.

With that in mind, Kingeter’s group made sure it was special.

The half-hour service included several readings, poems and prayers, plus musical interludes by Jonathan Rudie of the Baltimore Mandolin Orchestra.

Wade Pratt, an outreach coordinator at a Towson mental health organization that serves the homeless, spoke about a woman he had gotten to know over the years.

Deborah used to sleep outside in Dundalk and Essex, and was distrustful of those who tried to help her, he said.

When Pratt finally got her to a doctor, she was diagnosed with cancer and, unable to get medical treatment because of severe paranoia, died a month later.

“The solace I take from this is, when she did pass, she was inside, she was warm,” Pratt said, “and I’m thankful for that.”

He said it was important to remember Deborah at the vigil and to speak about her.

“There’s a lot of good in a lot of these people who have so much going wrong in their lives,” Pratt said.

In her remarks to the gathering, Baltimore County Communities for the Homeless President Megan Goffney said the event highlights the need for more resources for the homeless, such as housing, medical care and access to emergency services.

“Many who died in our streets and in our shelters or in other programs serving persons who are homeless died of illnesses or conditions directly related to or caused by their homelessness,” Goffney said. “In many instances, these deaths were avoidable.”

At the end of a service that was both sobering and uplifting, everyone in the pews joined in singing “Lean on Me.”

Glenda Macas, who led the song, said she chose it because its message would resonate with the homeless advocates who attended the event.

During the vigil, the group also remembered two longtime advocates who died this year: Stu Hancock, director of Prologue Inc.’s homeless outreach, which has a center in Towson, and Colin Phillips, who founded Night of Peace Family Shelter in Windsor Mill.

Afterward, the group walked to a nearby memorial built by an Eagle Scout to remember homeless individuals who have died.

They left tealight candles on top of the memorial and recited a litany: “God open our eyes to see and our hearts to care.”