Some criticize challenge to president’s fitness 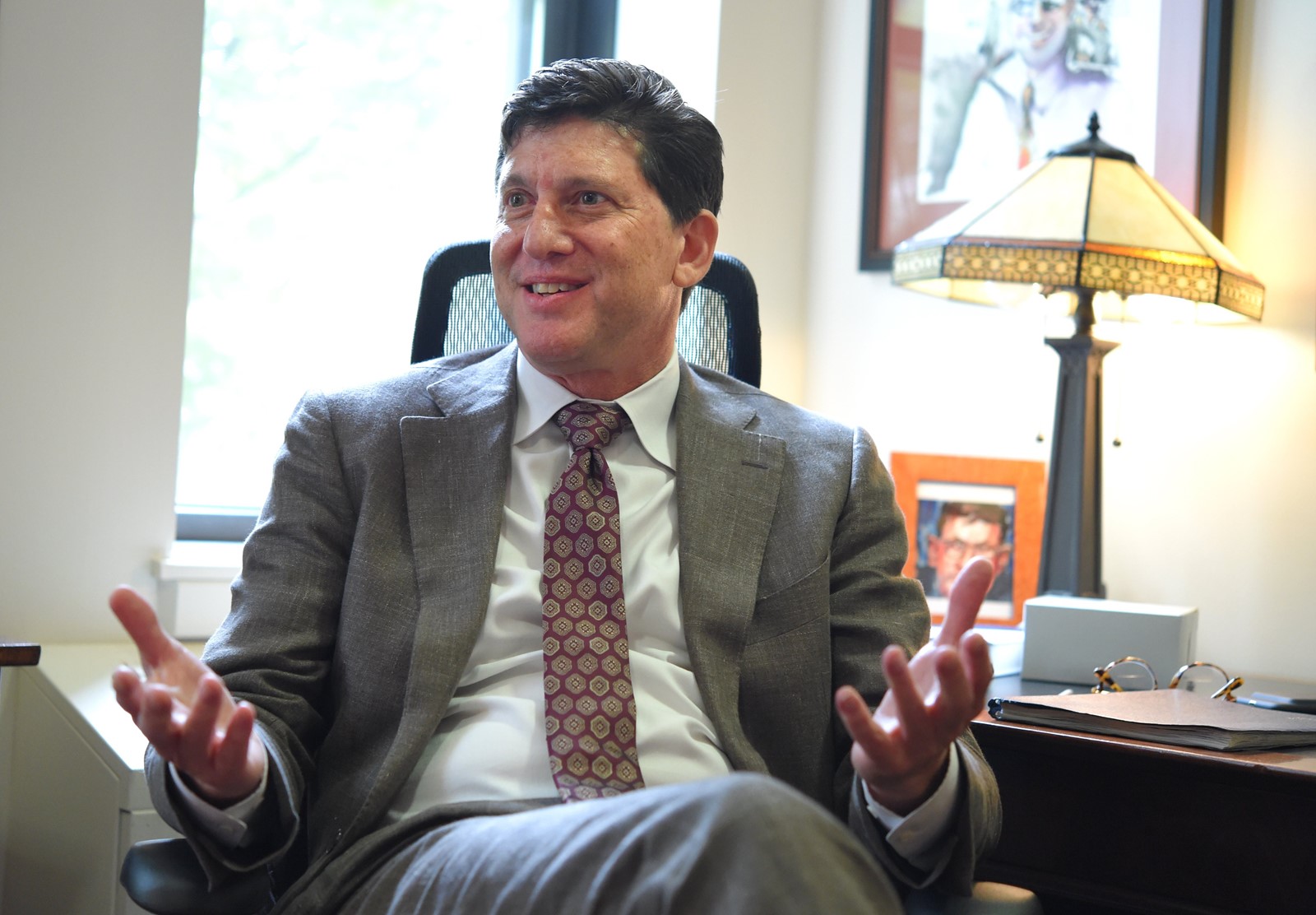 Put psychologist John Gartner on a couch and ask him about his childhood and one of the first stories he will recall is about his mom, Diana, and a touchstone moment in the fight for women’s rights.

In 1969, Diana Gartner and other leaders of the relatively new National Organization for Women made a reservation at the Oak Room Bar in New York under the name “Dr. Gartner.” The showdown that followed when the women arrived during the establishment’s male-only hours would lead to an early victory for feminism: The storied bar ultimately changed its gender policy.

John Gartner was 10 years old when the incident made headlines.

“It does run in our family to be mavericks,” he said. “Or rebels with a cause.”

These days Gartner is gaining national attention for a cause of his own — and creating a stir in his field — by trying to convince voters that President Donald Trump has a mental illness, and should be removed from his job because of it.

From a small office at Sheppard and Enoch Pratt Hospital, Gartner has emerged as a leader of a group of mental health professionals called Duty To Warn. The campaign began as an internet petition seeking to remove Trump under the 25th Amendment, which broadly lays out the procedure for booting a president who is “unable to discharge the powers and duties of his office.”

The Change.org petition, launched in January and aimed at Trump’s Cabinet, has garnered more than 62,000 signatures. But it has also drawn substantial criticism, and not just from Trump supporters. Both the American Psychiatric Association and the American Psychological Association advise members against assessing the mental health of individuals they haven’t personally examined.

And yet the campaign by Gartner and others appears to be expanding. Duty to Warn is planning to hold conferences in cities across the country on Oct. 14, many drawing established psychologists and psychiatrists. Gartner and others, meanwhile, have contributed to a book to be published next month: “The Dangerous Case of Donald Trump.”

Gartner — a Princeton graduate and former assistant professor at the Johns Hopkins medical school, specializes in borderline personality disorder and depression. He describes Trump as a “malignant narcissist,” a condition that includes paranoia, antisocial behavior, sadism and other traits along with narcissism.

Gartner points to the president’s insistence that President Barack Obama bugged his office, or that the crowds at his inauguration were historically large, as validating signs.

“Unless he doesn’t believe a word he’s saying, there’s evidence here of someone, really, who’s actually disconnected from reality,” said Gartner, 59. “We have someone in charge of the nuclear codes who is not in touch with reality. I can’t imagine anything more dangerous.”

Among Gartner’s most notable critics is psychiatrist Allen Frances, who wrote the guidelines for diagnosing narcissistic personality disorder — and who rejects any claim that Trump has it.

To meet the criteria for a narcissistic personality disorder, Frances said, Trump would have to display distress or impairment himself. One could argue he’s caused distress, Frances said, but he doesn’t appear to experience it.

“I think that this guy and other people like him mean well and are sincere and believe that somehow they have a professional responsibility to warn America about the horrors of Trump,” said Frances, an emeritus professor of psychiatry at Duke University. “But I don’t see them as knowing much about diagnoses.”

Frances, who published a book this month titled “Twilight of American Sanity,” is hardly a fan of the 45th president. He describes Trump as “the biggest threat to democracy since the Civil War.” But he says that doesn’t mean he has a mental illness.

The effort to apply a diagnosis to Trump, Frances said, “confuses bad behavior for mental illness.”

A White House spokesman did not respond to a request for comment.

Trump supporters frequently say the president’s brazen rhetoric is a big part of the reason why he was elected. His voters did not want another carefully scripted, play-it-safe politician.

And as with any politician, it’s impossible to sort out what Trump believes from political theater.

“Time and again on the campaign and in the White House, while something might sound a little different, the reality is that it usually comes out in weeks, months or even days that what he’s saying has a lot of validity to it,” he said.

Collins said Gartner “is clearly pushing a political agenda, and clearly doesn’t like the president.”

Duty to Warn has reopened a heated discussion in the psychiatric community over the Goldwater Rule, the 1973 prohibition on analyzing people from afar. It’s named for Sen. Barry Goldwater, the 1964 Republican nominee for president. When Fact magazine published an article in which psychiatrists opined that Goldwater was mentally unfit for the presidency, the Arizona senator successfully sued.

The policy was reaffirmed this spring by the American Psychiatric Association.

“The complexity of today’s media environment demands that we take special care when speaking publicly about mental health issues,” the association says on its website.

The Goldwater Rule doesn’t apply to Gartner, who is a psychologist. But the American Psychological Association takes a similar — if less ironclad — position.

“APA’s Code of Ethics counsels psychologists against diagnosing living individuals whom they have not personally assessed,” spokeswoman Kim I. Mills said. “Singling out mental illness is misguided and tends to further stigmatize mental health problems.”

Gartner dismisses the rule and similar guidelines as a product of professional associations concerned primarily with protecting members from lawsuits. It is preferable to meet with patients before assessing them, he agrees, but in cases where that’s not possible it shouldn’t be a requirement.

Much can be gleaned, he says, by observing years of public interactions.

“The only people who aren’t allowed to comment on Donald Trump’s mental health are the people who are most expert and qualified to do it,” Gartner said.

The phrase “duty to warn” has its antecedent in a similar ethical dilemma. It’s based on the name used for laws on the books in at least 28 states, including Maryland, that require mental health professionals to break patient confidentiality rules and report information about a patient if they believe that person may become violent.

Garter isn’t alone in his assessment of the Goldwater Rule.

Justin A. Frank, a clinical professor of psychiatry at the George Washington University Medical Center, has written books analyzing Presidents George W. Bush and Obama, and expects to publish a third in the series, on Trump, next year.

“My feeling is that the rule was based on a very specific kind of thing: Financial fear,” he said.

Frank said he relies on principles of applied psychoanalysis to build profiles of presidents.

“It’s true that I don’t get them in my office — and that’s a serious issue,” he said. “But there’s nothing I can do about that.”

Asked whether he has come to any conclusions yet about Trump, Frank declined to offer a diagnosis.

The Duty to Warn effort has drawn some attention on Capitol Hill, but almost entirely from Democrats — making it an easy target for Trump supporters and others to dismiss as a partisan endeavor.

Supporters of the group point to a private conversation caught on an open microphone this summer between Republican Sen. Susan Collins of Maine and Democratic Sen. Jack Reed of Rhode Island. During a conversation about the federal budget, Reed was heard describing the president as “crazy,” and Collins responded with “I’m worried.”

Republican Sen. Bob Corker of Tennessee told reporters last month that Trump had failed to display the “stability nor some of the competence” to be a successful president.

But those comments have been exceptions to the rule in both parties.

Rep. Jamie Raskin, a Montgomery County Democrat, introduced legislation this year to create a commission that would determine whether a president is unable to meet the responsibilities of the office under the 25th Amendment.

Raskin, a constitutional law professor from the liberal wing of the party, says he is addressing a long-term process issue, not targeting the current president.

Raskin, whose bill has 31 Democratic co-sponsors, declined to say whether he agrees with Gartner on Trump’s mental health.

“I do not take a position on that and I don’t think it’s my role to take a position on that,” he said. “There are enough signs of chaos in some of the dealings of the president that it reminds us of the importance of the 25th Amendment, but I personally will reserve judgment on presidential fitness — that’s why we have the process.”

Raskin is set to receive an award from Duty to Warn at its meeting in Washington next month.

“They appreciate the work that I’m doing in trying to flesh out the constitutional process,” he said.

Gartner is a registered Democrat, and has contributed to Democratic campaigns, including Hillary Clinton’s. But Gartner insists Duty to Warn isn’t a political exercise.

“I didn’t like George Bush, but I never circulated a petition about him,” he said. “I’d be grateful for a President Pence, even though I disagree with everything he believes in. ... He’s conservative, [but] he’s not mentally unstable.”

Gartner says the petition will be sent to each member of Trump’s Cabinet next month.

He acknowledges he’s unlikely to get the kind of quick response his mother received decades ago at the Oak Room Bar.

“All along I’ve felt, even if it was a hopeless cause, that we still needed to speak out,” Gartner said. “Bearing witness to these things is important. And I think bringing out the truth is important.”